Before I even pull a card for today’s daily divination, there’s an absolute compulsion to write about Aries!  How many are there right now?   Technically 4 but by tomorrow 6 significant travelers are moving through Aries.  I see planets and luminaries as psyche, as consciousness—astrological connections are significant and real influences.  Armed with simple, basic understandings of the Aries archetype, one need only open one’s eyes to look at the world scene and one’s own life and the lives of family and friends and through observation and correlation, there’s little doubt about the validity of the astrological connection with consciousness and psyche/soul.

A total of 6 in Aries!  And its April Fool’s Day!  Interesting.  Anyway…

I imagine some sort of higher intelligence doing a drive-by in our galaxy and knowing what’s happening on Earth just by the location of the planets and luminaries in the constellations.  They wouldn’t even have to land their spacecraft on this 3rd rock from the Sun; they could just glance at the stars and surrounding bodies to know the basic astro-weather here. Aries!  Aries!  Aries!  Mercury, Jupiter, Sun, Uranus—all in Aries.  And by tomorrow, we can add Mars and Moon.  That’s a whole lot of Aries.

It’s true that this energy will play out a bit differently in the life of each soul, each community, each country dependent upon the state of evolution and area to be evolved (via the birth chart—yes, communities, countries, and even corporations have a birth chart); but nonetheless Aries is Aries and energy is energy.  So I thought I’d describe the archetype of Aries here just a bit before I pull a Tarot Card today.  Anyone who reads this blog today, then, can perhaps correlate the descriptions to their own life—maybe it will help give understanding.

If I go on too long about it, I won’t have time to pull a Tarot card too.  It’s hard for me to curb that Libra “on the other hand” kind of debate dialogue, but I’ll try.  Aries likes to get to the point and doesn’t care about all that people-pleasing Miss Cordiality make-nice stuff.  Aries hates repetition and redundancy and wants to get it out there and who cares how it’s packaged!  So there’s your first bit about Aries.

Before we go on, I will certainly leave things out; I’m not meant to write a book or cover Aries energy in its entirety but maybe I can hit some major points that will be helpful to apply to your life for now, today and over this next little while.

Perhaps a bullet point list will move us along:

On that last bullet point imagine this (sabian symbol), “A woman has risen from the ocean; a seal embraces her.”  It is the “individual” emerging from the “collective” and the realization of “self” for the first time.  The desire in Aries energy is to become a separate, distinct being.

Side Note:  Any situation where someone has allowed themselves to become the alter-ego of another will no longer remain in tact!

Do you see how this energy is playing out right now?  And sometimes, you see, Aries is selfish–and selfish isn’t always bad.  Sometimes we need to be selfish.  Let’s take a brief example of how this could be so.  Let’s say we have someone who is very Libra-like in some ways that are actually unhealthy.  Perhaps we have a people-pleaser type or very nice lady, let’s say, who sacrifices herself for her family and has reached a point where in doing so for many years has lost her identity in all that selflessness.  Perhaps being selfless for that time period was what was needed for that soul’s growth–the experience may have  been a karmic necessity for whatever the reason (no judgment).  But now, the energy is shifted and it is time!  Maybe her children are grown and off to college.  Or maybe the marriage ends because the soul business is concluded between her and the marriage partner.  This Aries energy is going to help her to create a new identity, to break free, to be selfish is necessary in a good way!  You get the idea, right?  It’s about self-love in that respect. 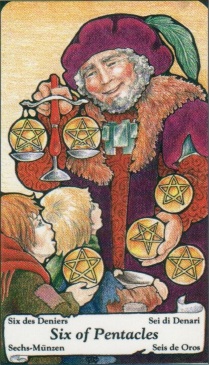 Now, let’s look at a tarot card for today for the daily divination message. Well, we have the 6 of Pentacles here.  And oh my gosh, here we go!
This is exactly what I’ve been talking about.  One of the archetypes of that tarot card is about being controlled by a dominate parent figure.  The 6 of Pentacles is about a child that wants freedom!  Sometimes I see this card as the corporation paying the employee less than what the work is worth.  It’s the energy that goes like, “I will give you just enough to keep you under my control.”   The card totally relates to Moon in Taurus.  I don’t have time to go into Moon in Taurus today but let me say that this tarot card/astrological correlation has to do with emotional security as it relates to money.  Aries will bust or burst through that dynamic now demanding freedom no matter how it affects emotional security and material need dynamics.  The desire for freedom and to create a new identity will be stronger than putting up with the old pattern energy simply for the sake of meeting material needs in the material world.  Something much more important is going on than paying the bills!

It’s Friday and I’ll post again on Monday–this is more ‘me’ telling ‘me’ that!  Yay, it’s Friday!

If you are actually reading this on a Friday–here’s me wishing you a great weekend!