Watch It, People are Speaking their Truth! Are You?  The Sun is in Gemini and this archetype relates to the Knight of Swords! 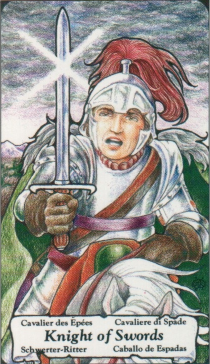 How do we speak our truth, say what we feel and express our opinions (expressing what we feel that we need to) in order to be in integrity with our self without being manipulative, controlling, overly willful, impatient or unkind? It’s a pickle! If we suppress or repress what we feel we need to say or express, this creates more problems in our own spirit. Yet, sometimes we can go too far and express from our own hurts and disappointments instead of our authenticity. For example, take this situation with someone who is very close to me… it relates to the Knight of Swords tarot card that I pulled today. Maybe there is something here that you can relate to or draw something from for your own path.

I am working to resolve some strong feelings of disappointment and perhaps even anger around a situation with someone regarding a situation from many years ago. At the time, I repressed and suppressed my own feelings. My sense of it is that at the time, I was on overdrive selflessly helping this person, putting my own feeling aside.

Recently something happened in this individual’s life and it feels (for me) like the past repeating itself to some extent—at least to the point that the previously repressed feelings are triggered. In my soul-searching as I ask myself where my recent feelings of anger toward this individual are coming from, it is clear they relate back to events from many years ago.

It’s like the picture on the tarot card—the energy is coming right at me! All of it, I’m certain, relates to my own shadow—parts of myself that I’ve been not willing to integrate. I asked for some help around this situation and had a dream last night and within the night reverie, I woke in the midst of it and said, “I did the same thing!” My take on it is that the soul-mind was showing me that which I’m disturbed with this person about is part of my own past somehow.

This integrative process was helpful and since then my feelings have softened—yet, that doesn’t change the fact that yesterday I spoke to this person firmly and directly expressing my thoughts and feelings without holding much back. I wasn’t unduly unkind; yet without premeditation (it just happened) I simply could not suppress or repress.   I gave voice to the anger that I’d held down for so many years without realizing it was there.

I’m finding lately that I’m able to stand in my truth and express it but am also on guard to not overdo it or not respond from a place of hurt or not out of an intention to control or manipulate. Rather to speak in a way that I am being true to my own self—in integrity with ‘me’ so that there is no conflict in my spirit afterward. It’s a pickle, as the saying goes. And one does not wish to create further karma but again one must be true to one’s self while not being unduly unkind to others.

That’s sort of the calling card of the Knight of Swords and I hope that my little example has given this archetype additional meaning.

Additionally, Knights are protectors and what I spoke to this individual about did involve protection energy. “Take good care of yourself and parent yourself wisely!” were some of the words that I spoke. My heart was coming from a sense of wanting to protect, but I was also expressing some frustration and anger that simply could not stay silent any longer. It was purely impulsive and I know that the transiting Moon yesterday that was sitting right on top of Pluto and triggering my natal Mars/Pluto/Saturn 12th house stellium helped what was subconscious to become conscious in that moment.

I have not spoken with this individual for many weeks and I received a phone call right when the Moon was triggering Pluto, et al—to the exact degree, mind you! And out it came—energy coming right at you! And that’s the Knight of Swords energy all over! Knights, after all, in addition to being protectors are defenders of truth and honesty and have no problem cutting to the chase.  Frankly, neither did I yesterday.

I would not normally blog about this kind of thing with a personal relationship but what happened yesterday relates so well to the Knight of Swords that I knew I that I had to. The Knight of Swords is willing to speak his ideas and opinions! And I did that yesterday. But he must be careful not to do so at the expense of others while he is so brave and aggressive in speaking his mind.

It’s a pickle and it’s not easy to know how we are affecting others when we speak our truth, but sometimes when the energy cannot be held back and the time is exactly right (like it was for me astrologically yesterday) the subconscious spills its stuff.  And sometimes the chips have to fall where they may while we hope that it’s in divine order and will be more helpful than hurtful.

Maybe something with me is changing – I feel more willing to speak my mind than ever before. There is a need to modulate the best I can and to do a systems check in the middle of it all to be sure that I am not speaking from a place of an old unresolved wound of my own.

The astrological correlation is “the firey part of air” so any combination of an air and fire such as Mars in Gemini or Mercury in Aries is the idea. The planets that are associated with Air are Mercury, Venus and Uranus. The air signs are Gemini, Libra and Aquarius. As far as fire energy goes, the planets associated with fire are Mars, the Sun and Jupiter and the signs are Aries, Leo and Sagittarius.

Currently, at the time of this post Mercury is in Gemini *(double air) and the Sun is in Gemini (fire and air).

Yesterday, the Sun in Gemini was making a sextile to all that Moon conjunct stellium stuff in my chart which made it easy (sextile) to speak (Gemini) with fire (Sun). Hey, I’m not blaming it on astrology but as above, so below—what can I say? The cooperative nature of the sextile made it easy to engage the Knight of Swords archetype of my psyche.

Since my message to this individual was to protect, parent and take care of the self; I simply have to, if I’m to be honest, look within and ask how well I am doing that very thing myself? And, if I’m honest, I can see that lately I’ve not been doing such a good job of it. I’ve not been eating properly, using the heat to excuse myself from my normal routine of exercise and some other things.

Bottom line? Sometimes when we repress our own feelings they come up when the karma is ripe or when the planets are in the right alignment. In order to resolve additional self-conflict later, speak your truth by being true to yourself and keep emotions in check, stand in self-integrity and express yourself when necessary by being direct but not blunt, authoritative but not overbearing, incisive but not cutting, expressing knowledge rather than opinions, and be logical but not unfeeling. And then don’t forget to look within and take your own advice on whatever matter it is you’re talking about. Trust your own inner authority and keep your motives in the realms of creating positive change without being self-serving. These are all good things to keep in mind especially now that the Sun and Mercury are in Gemini.  The Sun is at the midpoint of Gemini right now which is where it is said to be the peak-point or to have the strongest effect.

One thought on “Daily Divination 6-7-11 Watch It, People are Speaking their Truth! Are You? – the Sun is in Gemini – Knight of Swords!”