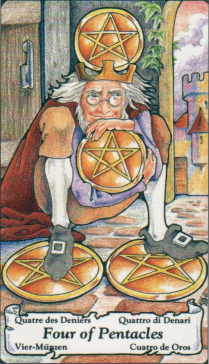 Experiences of the material world which result in mental or emotional uneasiness can, if held over time result in karmic complexes. The may also be already existing for many years, from birth or prior lives if you accept the theory of reincarnation.  No matter how they originated,  these are experienced as projections (involving others in dramas) somatic or physical responses (aches, pains, organ dysfunctions, etc.) and can become personifications (dream and fantasy figures and sub-personalities). Essentially, if experienced are not processed, integrated and released but instead become solidified, it can adversely affect an individual creating solidified fear, guilt, anger or other emotions related to fear itself.

The total and complete opposite of fixation and holding and overly identifying with the emotional, mental or physical aspects of experiences result in absolute non-integration, meaning letting experiences pass without processing the available meaning or wisdom available to be gleaned from of experiences themselves.

Today, the card inspiring today’s blog divination message comes from the 4 of Pentacles which is the same archetypal energy as the Sun in Capricorn. And Capricorn is Cardinal energy and an Earth sign.

With cardinal energy, the energy pattern we see is of “two steps forward and one step back”—initiation and then withdrawal based on insecurity. The Capricorn archetype is a passive, cardinal element of earth and is associated with individual consciousness from the space-time dimension, meaning life on earth experienced by a personality.

Capricorn energy in expression will initiate, then step back to stabilize (and/or integrate) and then initiate again—that would be a normal, expected expression of Capricorn energy. What I described in the first two paragraphs have to do with fixation or stubborn holding or being unable to let go of patterns so that no integration occurs. Let me explain.

Capricorn also represents boundaries, especially boundaries in consciousness, and so we could say that the energy of the 4 of Pentacles represents holding tightly to patterns, thereby letting no insight whatsoever enter consciousness and no integration takes place—in other words, now allowing insight or wisdom to occur, non-integration of experiences and holding and identifying with experiences of the past that have become fixed or solidified. If progress is made, it is very slow, very gradual—“two steps forward and one back.”

And as one might imagine, just as the image above shows, not much else can in get when one is stubbornly holding-on-to an energy pattern—a belief or a situation that one is stubbornly trying to control. Some sort of release of the pattern of energy is needed so processing can occur and some sort of integration can take place so that some wisdom is achieved and progress can be made.

As we factor in the Sun (this card relates to “Sun” in Capricorn), we are talking about self-expression and self-actualization as well as creativity—the Sun is one’s essence and the creation of the “self”. A distortion of Sun energy results in immature child-like behaviors, lack of will (or too much will), and insecurity. It may also express as a desire to play the role of “god” in other people’s lives and/or its distorted expression is “the drama queen” kind of energy.

Essentially, the Sun shows how the soul integrates and gives purpose to the life—it is the point of integration.

Today’s message poses the following contemplative questions. How well do you understand the structure of your mental, emotional and physical patterns in life? Are you integrating wisdom from understanding your patterned responses to life? Are you using that wisdom to realize what is serving you (what you need to hold to remain stable and secure) and what you need to release in order to grow and evolve as a human being who is having a spiritual experience? Do you recognize outmoded thoughts, ideas and beliefs? And are you willing to release them? Which one’s do you need to hold in order to remain secure while still allowing the flow of life (change)?

When we are creating a new experience for ourselves—say when we’re making change in our life, many people tend to hang onto the old a little bit while integrating the new. It makes me think of the transition that I made from working for a company to working for myself; I integrated it gradually, doing readings while I was still working in my old 9-5 job. Gradually, letting go and integrating the new reality much like that “two steps forward and one step” back energy mentioned earlier. I did that until I could feel secure in the new reality.

There were, however, a few times when I wanted to maintain the status-quo and got a bit stuck, but each time I turned completely back to the old reality, that became even more unbearable than the fear of creating a new one (reality). So it was back-and-forth until the new reality took hold; meanwhile, I learned from observing the process.

And that is what today’s message encourages—to learn from life’s experiences instead of clinging fearfully to the old ways of being, old out dated beliefs/traditions and grasping tenaciously to the old way of life which includes materiality. I eventually gave up the high paying job in favor of integrating the new reality realizing the importance of spiritual growth over a high paying job.  I’m not implying that everyone should do this. That is just an example of a meaning of this card and the Sun in Capricorn archetypal energy.

Life is always in flow and to resist that flow is one of the lower expressions of the archetype that I’ve been describing. Sun in Capricorn energy wants to control and impose its will, resisting movement and change. Some control is needed but too much of that and we end up in stagnation, non-growth and non-evolution.

Life, like the ocean, will flow whether we like it or not and we can build a raft and go with that flow or we can swim or row against the current and exhaust ourselves.

We either change or drown. Sometimes in life we find it’s like our will (the Sun) against Divine Will, and as they say on Star Trek, “Resistance (Capricorn) is futile.”