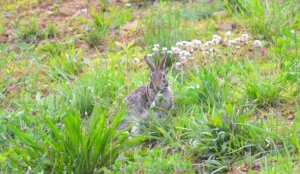 Okay, I will.  Pardon that.  It was just me speaking to The Universe or to that Inner Voice, call it “spirit guide” if you will or maybe my very own soul but there is this energy that I converse with.  Talking to myself? Nawh, it’s much more sophisticated than that; although I do plenty of that as well.  On that last part… file it under ‘Hazards of Living Alone’.

Anyway, as soon as I saw this picture this morning – I didn’t take the photo but I do receive certain photos each day.  In any case, busy as I am (like a one-armed paper hanger) this photo arriving today is no accident and I have to share this little story.  I’ll be brief.

The bottom line is that loved ones on the other side can take over the body-minds of animals.  There’s the romantic story (true story/one of my clients) of a couple who loved a song about a rare colored dragon fly and actually had a conversation previous to her sudden death which related to the song about dying.  She was in previously perfect health and suddenly died very quickly and he, weeks later was about to take his own life when a rare colored dragon fly, the same color as the one in the song, came to him and held to his window in rare dragon fly behavior.  This convinced him not to take his own life. The song was one that was Japanese, if I remember correctly.

The history of doing readings reveals many similar stories.  My own mother assured me that she would get messages to me after she crossed over and while she did come to me hours after her crossing and a few times since, the spring after she crossed a female cardinal tapped incessantly at my windows (notice the plural—the s) from late winter until late spring day after day!  It’s a wonder this female cardinal’s beak didn’t fall off and this bird followed my whereabouts in the house; she knew where in the house I was and would tap on the window where I was.  That starting each morning on my bedroom window to wake me up and moving to the kitchen window to tap her beak while I made my coffee!  And then she’d follow me room to room.

Okay, you get the idea now, right?  We lost our father when he was in his early 50’s and my sister was around 12 years old at the time.  She was talking to someone about how she never really grieved and she was on the phone with me when this bunny showed up at my feet.  (Not the one in the photo in this blog post—a different one)  I was outside along the side of the house on the portable phone speaking to her while waiting for someone to come to the house when this bunny rabbit hopped toward me and stopped a foot away from me and stared up at me!

That is very rare behavior for jumpy, quick, easily startled rabbits!  I kept talking and this bunny still did not startle and held its gaze and movement.  Speaking to it I said, “What is it? What do you want?”  And so clearly and loudly that I, myself, nearly startled the reply in my head that came was, “I am here to comfort her.”

I had just been saying in reply to her question about who comforted her when our father died that Dad, himself, comforted me regarding his death by coming to me in a dream.  And my sister said she has never dreamt about our Dad.

Well, you see how that is?  That was my Dad speaking through that bunny rabbit—to get my attention on behalf of my sister.  She is open to my work and these types of things but takes it with a huge grain of salt if you know what I mean.  I sensed that she half believed me or that I was exaggerating the occurrence; but there it was nonetheless.

Loved ones on the other side can get messages to us through taking over the consciousness and bodies of small animals.  I’ve not a single doubt.