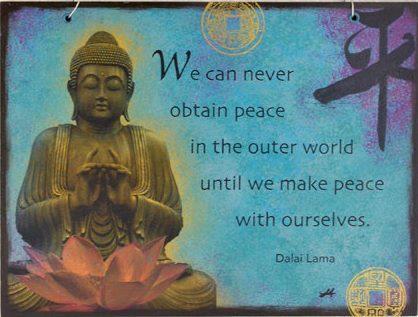 Yeah, well there it is—Truth.  We recognize it when we see it and do our best to live it.

“We can never make peace in the outer world, until we make peace with ourselves.”  –Dalai Lama

We tend to want to think of those types of cliché’s on global scales but what we see globally starts with individuals.

I’ve had some trouble making peace with myself – my psyche has been disturbed as I continually adjust to being around so many humans.  I’ve been a loner in solitude for so long that—well, maybe too long.  I’m in a community now and it is unavoidable—humans are bumping into me left and right and what I’m noticing about children especially is mystifying.

I watch these kids rule over their mothers and the mom’s giving in, caving at the child’s demands.  Further, this lack of respect and abusive behavior of kids toward their mom’s is very disturbing.  I stood in line at a subway sandwich shop late in the day and next to me an overweight little boy (probably around age 9 or 10) demanded extra meat on his sandwich.  She reminded him that they’d previously had a conversation about it and she wasn’t going to “play that game” with him she said.  I was barely noticing their interaction until he raised his voice and to his mother said, “I feel like punching you in the face right now.”  She rubbed his back and said okay that he could have extra meat on his order!  (What?!)

I don’t want to feel the vibes of these types of exchanges–in fact, I recoil but still take it in.  Chaos comes in and peace goes out the window.   I’ve got to do better!

Earlier yesterday I went to the pool to do my exercise and a little tyke was doing her best to get her mother’s attention and her mother was doing her best to ignore the kid while reading a book!  The exchange that went on for the whole 30 minutes that I was there was… the power plays and manipulations from this little one was pretty astounding climaxed by this 4-year-old telling her mother “We’re going right now” and the mom actually got up and left with the child.

Later while in a clearance store this 8-year-old is screaming at her mother about a product she wanted arguing for the purchase and the mother simply allowed the back-talk and disrespect!  What in the world is going on with these humans?  I walked to the other side of the store and shortly afterward the same little girl ends up on my aisle and screams, “watch out!”, as she nearly hit me with a shopping cart that was too big and awkward for her to handle.

It was a week ago when an out of control little boy who wreaking havoc at the pool “handled” his mother in a jaw-dropping way.  He was being extremely loud and sassing her at every opportunity until she said to him, “Now you’ve really done it and we’re going to have to leave—get out of the pool.”  He dove under water every time she tried to speak to him until she eventually got into the pool herself and drug him out.  “We’re leaving”, she said.  He threw himself down in a poolside chair and scolded her, “30 seconds!  I will sit here for 30 seconds and then I’m going back in the pool.”

To my amazement, she agreed to his terms and said, “Okay, but you cannot get up before then and don’t even try!”

What?  What happened to “We’re leaving”?  He mocks her then over and over about wanting her towel until one of the other mothers gets out of her chair and yells at the unruly child, “Look little boy, don’t talk to your mother that way!”  With this the kid swam off to the other side of the pool for a while but within a few minutes started back toward her direction calling her “fat” and “chubby” and other names equally as demeaning.  What did the mother do?  She ignored him.  I left the pool.

Certainly I’m noticing these things based on what I’m feeling within me and sometimes, I’ll have to admit, it isn’t exactly peaceful being around others and having to be part of their drama simply going to the pool, walking through a discount store or buying a sandwich!  As a psychic or sensitive, I’m swimming in other people’s energy much more than I’d like to and am still having to grapple with how to do this thing properly—this living in the big city and having so many humans dabbling in my auric field is something I’m not practiced at.  Talk about coming down from the hermitage—the world seems to have totally changed!  What has happened to children’s discipline and respect?  What is going on with these mothers? What kind of parenting relationships are these?

I have to work on my inner peace building techniques if I’m going to be able to hang out around here and function.  Do I need to shore up my boundary?   Do my best to stay out of shock and awe when these kids freak out at their mothers?  Do I focus on having no judgment about what is not my affair while resisting the urge to petition local government to implement some sort of mandatory parenting classes?  Okay, that last one is pretty far out there, I’ll admit.

I even heard the adults at the pool one day talking about how lazy their teenagers are like they have no power over how many hours they lay in bed!

I think I’m beginning to understand why the T.V. Shows about super nannies are popular.  It seems that on TV we have bride-zilla monsters and kid-zilla monsters too.

I have to make peace within my own inner heart, mind and soul in order to be able live in a world where peace is not… well, it’s not like living in the forest like I’ve been accustomed to.  I’m still a work in progress (and the parents and children are too) and it seems that I, for one, am being challenged in a new or at least different way to re-establish peace within.

Ahhh, to be the calm eye of the storm in the middle of the hurricane of humanity…  I’ll get there again.  I’ve just been a bit out of practice!  I remember what I used to do way back when and I will have to do it again–blogging helps me work this all out.  I used to send love–toss out a pillar of light to surround the folks or send a beam of light from my 3rd eye.  Yeah, I remember now… I’d run upstairs (go UP in my mind and heart) and from that point in consciousness send love infused light in the direction of the disturbing force.  It benefits them and me; perhaps you’d like to try it too should you happen run into a kid-zilla with a soft mom out there.  Or if you, like me, just came down off the mountain and rejoined humanity!

Ending with a Buddhist thought:  May all beings be well with hearts filled with kindness and respect for one another.