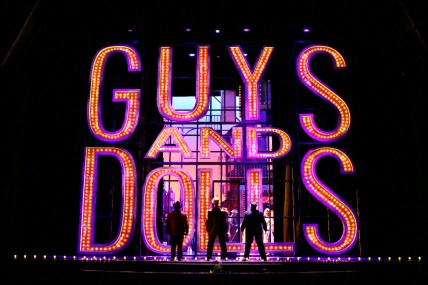 Just a few thoughts here while contemplating the energy of oppositions this morning with this month’s full Moon nearly upon us (Full Sunday March 16, 2014, approx 1 PM Eastern time).  We know that when the Moon is full it is opposing the Sun–the Suns light shining fully on the Moon.

In astrological terms, oppositions (planets opposing each other in the chart) can be challenging–or that is one view point.  Two forces fighting one another; however, one can energize the other like the energy of the Full Moon.

Did you ever have a conflict with some energy or oppose it (person, place or thing) only later on to find yourself empowered by it?  Oppositions can be like that–at first challenging and then empowering.   Or at least the empowering potential is there.  Life is like that.

I also think of the middle path when considering oppositions, meeting half way and blending.

I took a look at my grandson’s chart this morning.  He is going to open the performance of Guys and Dolls in the school play singing the song, “Sit down you’re rocken’ the boat”.

His birth chart holds a South Node in the very public and “on stage” 10th house where the rather large performing Jupiter resides natally  as well along with Mars.  The growing Full Moon is moving over all that energy now through opposition, triggering his past (South Node) and the evolutionary intention for this lifetime (North Node).

His emotions (Moon) over these next few days while he’s on stage will be energized by the opposing Jupiter, Mars and South Node.  Said another way, his past life energy (South Node) and natal Mars and Jupiter will energize his Moon, his emotions.  That should help empower his performance in the school play.

When I picked him up from the play practice yesterday, he loaded his things into the trunk of the car while singing his song!  He seems energized and excited about the start of the play right upon him.  His natal planets opposing his transiting Moon now energize him and I’d venture to say that an intense time for him will be tomorrow night’s performance as the Moon in transit squares is birth Pluto in the mutable (flexible) signs of Virgo/Sag.    My guess is that he will rise to the challenge–his chart seems wired for it!  Let your those inner stars shine kiddo!