Sometimes we are held back, but with good reason. We either believe that we live in a Universe that is benevolent in which All is working in our favor (no matter how it looks) –OR we don’t.

It was Einstein who said that this is one of the greatest questions of our life. “Albert Einstein once commented that the most fundamental question we can ever ask ourselves is whether or not the universe we live in is friendly or hostile. He hypothesized that your answer to that question would determine your destiny.”

The cosmic communiqué for today is to look at areas of your life where you may feel that you are being blocked—realize that it is only for a short time and this mild restraint is purposeful.

It’s happened in my life too many times to count—and yours too if you’re observant and honest about it. We can all look back and recall times when we experienced life holding us back from advancement—and thank goodness for those times or we’d have made a dire mistake. It all goes back to the Einstein point above—you either trust the universe or you don’t.

“Due to circumstances beyond our control….” – you know that phrase, right? That sort of epitomizes the source from which today’s message is inspired—Kua 9 of the I-CHING. The various names for this Kua give more detail: “The Taming Power of the Small”; “Humble Strength”; “Gentle Restraint, Holding Back”.

BOTTOM LINE: The bottom line message today is that the moment for action on a large-scale has not yet arrived.

Here’s an example. You know those times when the clouds in the sky turn grey and the wind starts to pick up and all indications are that it’s going to rain–but then it doesn’t? Like that! It will rain eventually and while the potential is there, it’s (for reasons beyond our control) being held back. It looks like it should rain, but no rain—and if you wanted the rain to occur; it can be a bit frustrating and disappointing that it never rains a drop. But then the bottom falls out and it pours—later! Of course, we could flip that example—days of rain and the Sun tries to come up and doesn’t for days on end–and then and then suddenly the rain stops, the clouds go away and there’s the Sun brighter than ever.

It’s at these times that I like to remember a line made known by Byron Katie, “It wasn’t ‘supposed to’ rain. How do we know? Because it didn’t!” And that brings us round again to Einstein’s greatest question whose answer determines your experience.

Sometimes we want to make a big change and “things happen” causing all of our efforts to get us nowhere—that’s simply life. What’s the advice for these times?

You cannot ‘push the river’ or cannot ‘make it rain’—practice watching events unfold with dispassion and with passive alertness.

Carry on without being overly attached to particular outcomes—reinforce a core belief that the universe is ultimately working in your favor.

Life is giving us an opportunity in those times to explore our humility and trust. The image on the card above contains a spider from which we can take a lesson. She works tiredly to prepare her web without anyone noticing. Many times her work becomes damaged—the web becomes torn. She simply tends to the repairs as soon as the notices. She doesn’t seek attention and she works quietly and efficiently blending into her surroundings—and when she’s done she waits.

That whole spider and web thing reminds me of my first website. We often hear the phrase made famous in the movies, “If you build it, they will come.” That’s true but not until google’s spiders pick up the site and list and link it! If you’ve ever created a website, you know the feeling of having worked tirelessly on a website and then publishing it and it’s a while before anything really happens traffic-wise. Maybe it’s different these days, but that’s how it was when I created my first website. Anyway, that’s just another example of today’s message—don’t let minor impediments get you down!

The Astrological Correlations to Kua 9 are:

Leo – the Sun; purpose; giving meaning to one’s life; desire to be completely in charge of one’s destiny

The Tarot Correlations to Kua 9 are:

The Hermit – the ability to shine forth without fear

Strength — not allowing circumstances to control you

Justice – knowing that life ‘is’ fair; looking at the other side of issues

Periods of waiting are a necessary part of life and  time is not wasted when you are waiting with the confident knowledge that sooner or later the drought will end. Oh, Yes! We’ve all lived this so many times!

If  you are a woman and have been pregnant, you know this waiting period; and if you have gone past your due date, you know it even better! Today’s message addresses a type of  required postponement or delay that is… well, take the example of fruit that falls from the tree when it is exactly ripe.

When I think of the ripeness of fruit, it always has me thinking of karma being ripe and the divine timing of things. I’ve been blogging about my car situation recently– I can use this as an example.

My daughter felt like I was being, to use her words, “taken advantage of” by the local auto place here. (That was her trip, not mine.) Meanwhile, I was in a limbo situation waiting to see if the car (Saturn) that I just bought was going to be able to be fixed. Waiting! Kua 5! There was a short in the ground wire or something which was preventing the car from starting.

My youngest Aries daughter was quite upset and began to tell her friends about this. Meanwhile I was waiting and had no idea of my daughter’s conversations with other people while I was waiting. This epitomizes Kua 5’s meaning—things are happening even when it looks like nothing is!

The kind of progress that is taking place is invisible and everything is being guided by a power greater than yours.That is the basic bottom line of today’s message. To conclude the example just given, if the Saturn car had not malfunctioned the day after I paid for it, I would have gone through with putting the title/registration in my name and would have had more of a problem getting a refund.

Because it did malfunction and because my daughter told her friends about the situation, one of her friends had a car (Pontiac Sunfire) that they were planning to sell in about 6 months, but because of my “story”, she decided to sell it sooner– to me!

But, meanwhile, I was waiting without knowing any of these details regarding the conversation with my daughter and her friend.

When I asked Higher Mind what was going on, what I received was that the delay will work out in your favor and to be patient.

I knew I would somehow have some car or other, but there was a delay. The great gift of waiting had been given to me and the requirement from me was my willingness to step back from the desire to push forward.

I was feeling vulnerable and in the process of “itching to go forward”, I developed a good case of poison ivy as I pulled weeds to vent frustration.

It was continual work to bring myself back to the present moment over and over again. The blessing was that my grandchildren were here to help me do that!

Today’s message is to “wait in trust” in spite of the fact that there are no clear indication as to the timing of events. 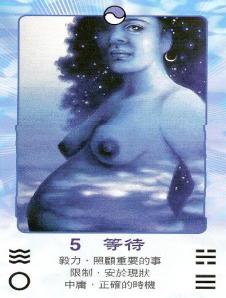 There is a deep process occurring within your being that must be completed before external events can shift.

Even though it may seem that life is working against you in some way today, it isn’t.

Just know that everything that is delayed has a good reason for being that way.

I know that it is hard to say “yes” or to accept life circumstances or events that seem to be going backwards or in the wrong direction—a good mantras for these times that we all experience periodically would go something like,

“It ‘is as it is’ and I detach and surrender to the wisdom of the universe in this matter.”

Put your focus on strengthening your sense of well-being—cool down and redirect the energy of impatience to more creative pursuits.

Wait patiently with optimism today! Something new is about to be born!