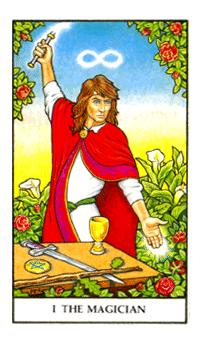 Yeah, I’m doing it – no doubt about it! Procrastination! Dude! Maybe it’s a Mars thing—Mars is stationing as it moves ahead direct, pulling us in a new direction. Maybe that’s IT – blame Mars!  I’m nearly at the final mile in my closet projects—close to the finish line and I am resisting the big finish! WHY is that? And what do we do about procrastination tendencies? Why do we do it? Likely the i-ching would give us a deeper answer but I’m going to pull a tarot card instead and the whole time I typed the first half of this sentence, I was mentally reminding myself (at the same time) that I have bills to pay and a bank statement to reconcile. Ugh! Yeah, and here it comes… more. There’s outdoor projects awaiting too; yet here I am at the keyboard with the coffee. Maybe a little clarity will help—thus, let’s shuffle and draw a card!

As I grab for the cards, I think of my brother—you know something? I haven’t heard from him since last we heard that he was returning with the body of his wife to the village where she was born for the purpose of further burial ceremony. She was a native Alaskan… American Indian; but then most Alaskans’ are and the rest are white who exploit (the funeral home in Anchorage certainly did!) or serve unless they are “THE CORPORATION”. From the layman’s perspective and not knowing much about the culture and observing from way outside, I think all of the talk of “The [mighty] Corporation” may have to do with gas or oil or other exploitive conglomerates. Anyway, one of my other family members said that the tribe she’s from is Inuit but this is wrong and her own family told us (via the grapevine which is apparently how all information in the tribe is disseminated) the tribe is Athabascan which later became Navajo and Apache as they migrated south. Sometimes Athab [p]ascan spelled with a P instead of a B and is pronounced that way. They are very scorpion-ic (Scorpio like) similar to the native local’s around here i.e. private and secretive and suspicious of outsiders. Anyway, while I’d like to project/blame my procrastination on my brothers incommunicado—that’d be wrong.

Let me shuffle the cards and see what the tarot oracle may say about my delay tactics and feelings of procrastination today and meanwhile maybe there’s some wisdom to come for you too on those days when you are putting things off.

Another sip of coffee. Shuffle. Well, well, well. What do you know? It’s THE MAGICIAN. Okay, got it; it’s going to be a ‘personal power’ message that we get from the tarot oracle on this. Whenever I look at this card, it makes me think of (forgive me) but witchcraft – you know? Calling on the elements of the North, South, East and West and drawing down the Moon and that kind of thing. It is totally about focusing one’s energy too but it is about calling on help from the forces that be in order to do that. Okay, so much for my initial impressions. What I’ve gotten for myself so far is that in order to get across the finish line with those projects it is important to envision the outcome—use the mind’s eye. That’s what the magician is doing. All we need to stop procrastinating is a little “magic”.

Suddenly I think of the Sorcerer’s Apprentice and that scene where the apprentice puts the brooms and mops to work and then falls asleep only to find he’s created chaos. Anyway, magic. That’s what we need and in order to have it, we call on the big guns. Well, if you’re not a witch or a magician, then what? How about just envisioning the outcome, focusing on the vision and a prayer or two or if that’s not your cup of tea—an affirmation or mantra. How about something like, “I’ve completed my work and it feels so great to have it done.”

The Magician is about creativity and imagination – seeking creative solutions. Visualizations helps with that. And it’s also about the strength of ‘will’….like I said, personal power. “I will do it dammit!” Well, you get what I mean, right? In a way, it’s like the Strength card and also the Chariot but let’s not get lost in more detail—that only puts things off even further. The Magician is assuring us that we have everything we need to get the job done; we just have to focus our desire and will. And most importantly we need the enthusiasm to make things happen—like I said… we just need a little magic. And how does that occur?

Well, how does anything at all occur? Anything that happens in the outer world happens first in the inner world—in the mind! Like I said…. visualization. And earth energy—maybe another cup of coffee or forgive me but maybe something like a 5 hour energy drink (I never had one but saw a commercial the other day) and then there’s always ginseng or ginseng tea.

Well, maybe THAT [pause] was in divine timing! I had a call into my daughters and just got a call back. I’d wanted to know how they did in the race this morning—one of my girls and my grandson ran a half-marathon (13 miles) this morning! They’d been training since winter for that. Talk about being inspired… running for 2 hours + straight! Really? And I am being a wimp about finishing my little ole’ minor projects around here! That pretty much does it! I’m good now. What just happened was a total MAGICIAN moment – inspiration!

The MAGICIAN is about holding your position in time and space and remaining in that flow. If they can do a half-marathon, I can certainly plant a few bushes, finish sorting through a few clothes, balance my checkbook and pay a few bills! Let’s master those elements!

ADDENDUM or FINAL THOUGHT:  In my conversation with my daughters, we talked about the finish line and her sisters said that she nearly turned the wrong way near the finish line.

HO!  do I remember how that goes!!  I ran a 12 mile race once;  they ran 13 miles today… anyway, I remember how people will yell out how much farther to the finish… and how it always seems soooooooooooooo much longer!

One race that I recall in particular in which we were told only a quarter of a mile to go… there was a hair pin turn to the left to get to the finish line but when you’re at the end you know you are looking for it and it just seemed to be the longest 1/4 mile I’d ever run!  If you can ‘see’ that finish line, it helps!

My daughter and grandson got to the finish line this morning after running for longer than 2 hours straight–and so will I in my own little way!  C’mon!  WE CAN DO IT.  One step at  time; let’s GO!